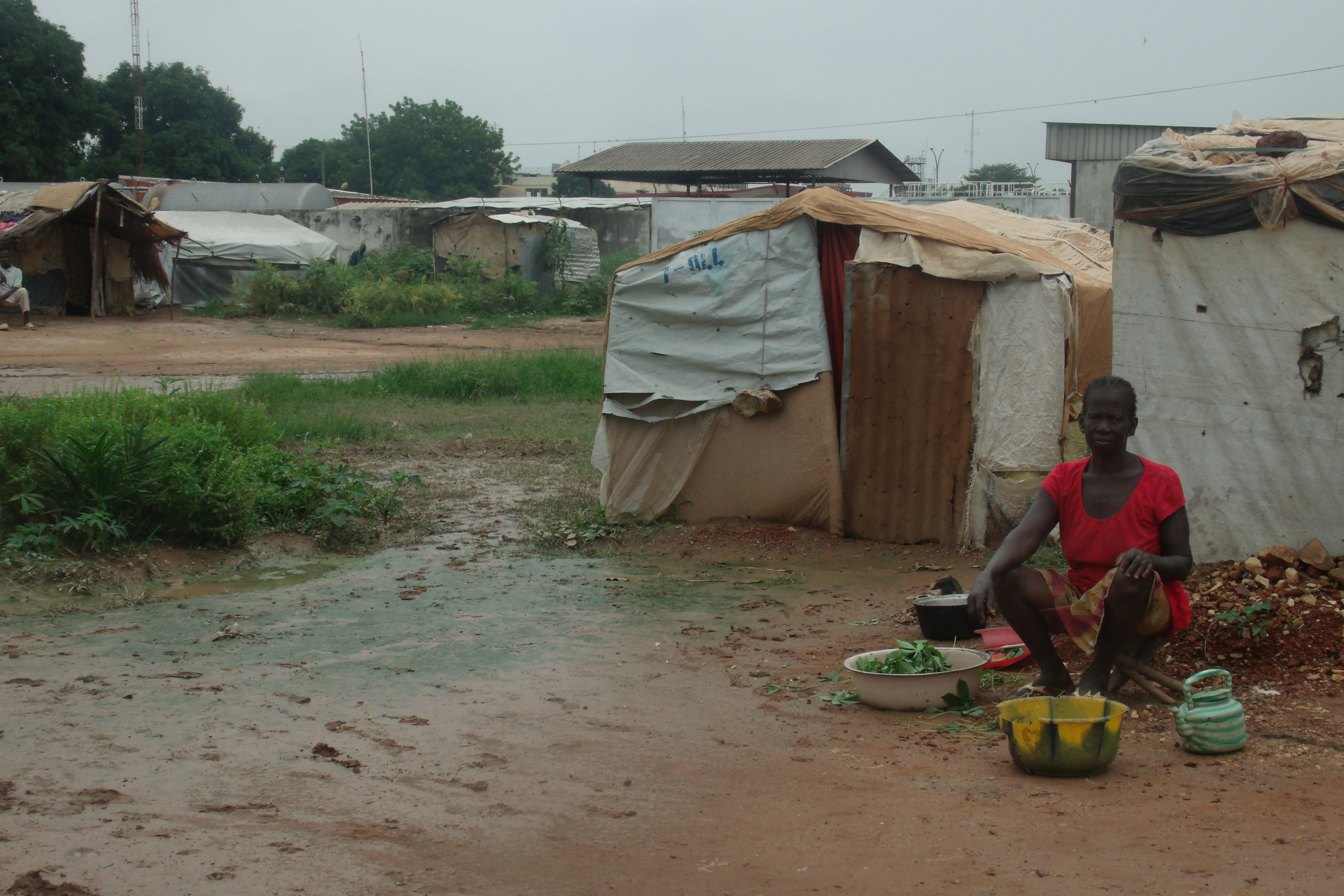 Yazinon Florence took a sip of water as she prepared to cook two bowls of rice, the only food she and her grandson could expect for the day.

“We cannot say we live. We survive,” the 55-year-old Ms. Florence said. “We pray to God that the war ceases and we return home.”

Almost five years ago, when Muslim rebels calling themselves Seleka — “Coalition” in a local language — overthrew Francois Bozize, the former president of the Central African Republic, Ms. Florence and other Christians fled to a camp for internally displaced people near Bangui M’Poko International Airport amid the fighting because she knew French peacekeepers could protect her there.

“What alerted me were detonations and rocket launchers,” she said. “Then I saw Muslim women slaughtering Christian women and their babies with sharp knives like animals. They even killed a pregnant woman in front of me.”

But the sense of security she enjoyed has evaporated since French peacekeepers left in late 2016, handing duties over to the 13,700-strong U.N. “stabilization” mission, known as MINUSCA.

“Now we are abandoned in this neighborhood without any security and exposed to attacks from Muslims,” said Kongbe Simone, 54, an internally displaced person who lives near the airport.

He was permanently injured and lost three of his 10 children during an attack by Muslim forces on his Bangui neighborhood a few years ago. “We are scared,” said Mr. Simone. “I cannot run. In case of attack, death will find me on the spot.”

France’s departure, amid charges that U.N. peacekeepers had sexually abused residents, including children, has led to a deteriorating security situation in the Central African Republic, among the continent’s poorest countries. After decades of civil war and intermittent peace, the conflict in this central landlocked African country is heating up again. Armed patrols operate roadblocks, and reports of violence, reprisal killings, looting, kidnapping and human rights abuses continue nationwide.

The U.N. Refugee Agency recently said more than 5,000 refugees, mostly women and children, had fled to Chad since late last month. Currently, around one-fourth of the population of 4.6 million are refugees abroad or displaced internally in the country, the most ever, the agency added. More than half of the country’s population will need some form of aid this year, relief officials estimate.

After he assumed power in 2016 during a lull in the fighting between Seleka and Christian so-called “anti-Balaka” — or anti-machete — militias that sprung up to fight the Muslim militants over the years, President Faustin-Archange Touadera’s government offered $91 to displaced people at the airport camp and other facilities for internally displaced Christians to go home or find other housing.

Ms. Florence used the money to rent a small two-room house where five occupants sleep on an old mat on the dirt floor. She and her family live on rations distributed by humanitarian workers and cassava she grows on vacant land.

“We rent this house at [$13] per month, but we have many unpaid months,” she said. “We also have to eat. It’s really difficult. … In the neighborhood where we used to live, the Fulani currently occupy our house.”

The Fulani are a Muslim ethnic group who have occupied homes evacuated by Christians. They often clash with homeowners returning to reclaim their property.

Albert Kongbe, 18, said Fulani squatters killed one of his neighbors in August after he reclaimed his home in Yambassa, a district of Bangui.

“It was already dark,” said Mr. Kongbe. “The attackers arrested him in a dark corner and shot his chest, feet and head. The displaced were protected at the camp, now they are exposed in the neighborhoods and MINUSCA does nothing to protect them.”

MINUSCA said in a statement earlier this month that it was doing its best to quell violence in the country after anti-Balaka forces killed two people in fighting that displaced 500 people in Paoua, a city in the country’s northwest.

But in Bangui a MINUSCA soldier from Cameroon who asked to remain anonymous said Mr. Kongbe’s experience is common.

“Our elements cannot be prosecuted by this criminal court for abuses because we are victims,” said Souleymane Daouda, political adviser and spokesman for the Unit for Peace in the Central African Republic, a group of Fulani rebels made up of more than 2,000 men who control a dozen villages in the country.

“We always react in self-defense,” he said, citing oppression they endured under Presidents Touadera and Bozize, both Christians. “Why would justice blame someone who defends himself?”