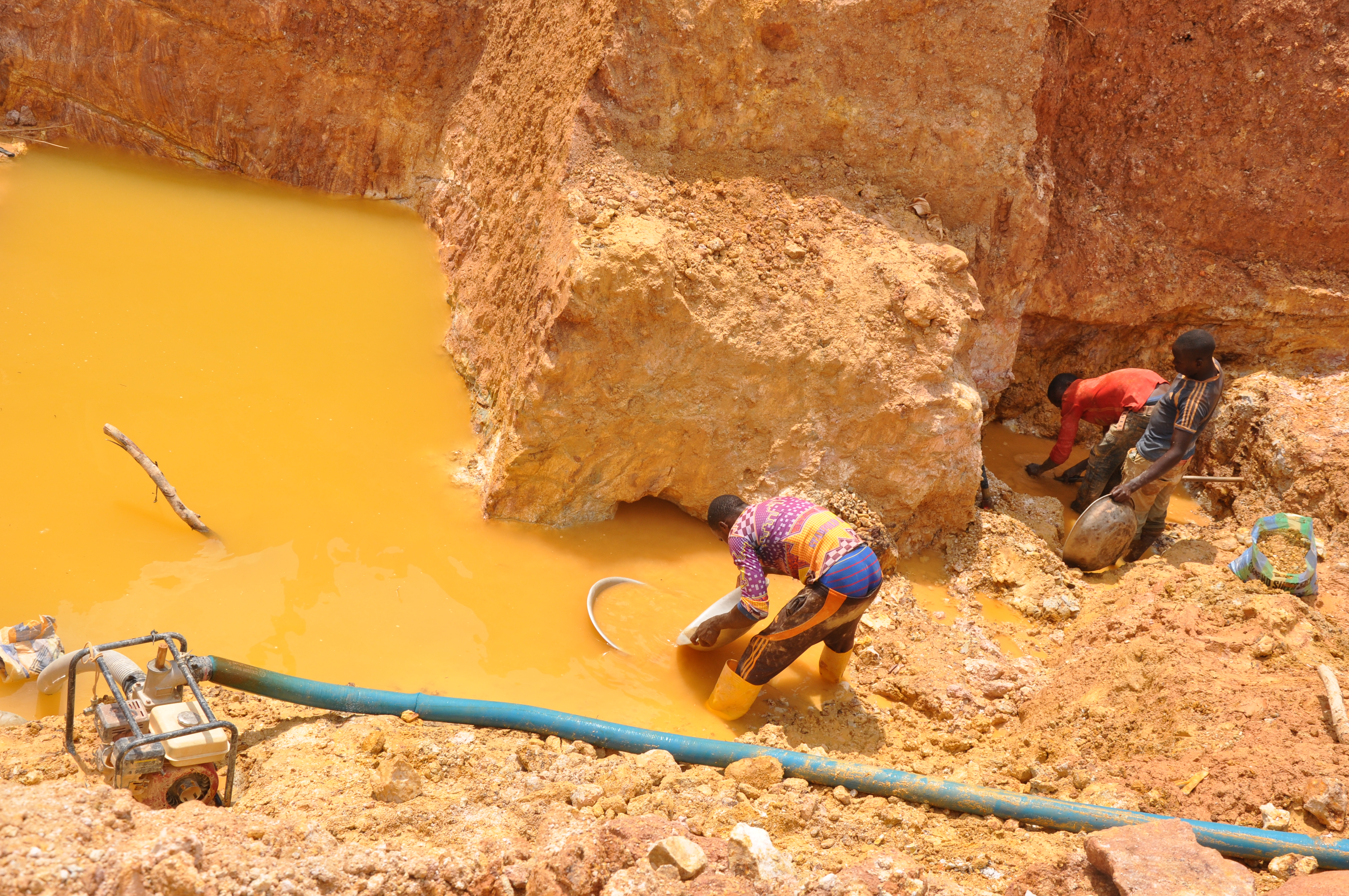 Sidonie Maboue pulls her hands out of the muddy water to nurse her eight-month-old baby. Sitting on a piece of multicolored fabric, she has filled three bags of gravel with five of her twelve children under a blazing sun.

“These pebbles will be crushed, sifted and if you have the chance, you can find gold but it is difficult,” says the 45-year-old widow who sometimes earns 1500 XAF, approximately $2.8, after several weeks of digging.

Around her, a hundred people noisily search the yellow metal in a chain work at the Kaye craft quarry in Ngoe Ngoe, a village in the region of East Cameroon. Men dig the earth, crush the gravel and dry the holes with a motor pump. Women collect gravel from muddy waters or prepare food in a makeshift kitchen. The children have fun on the back of their mothers or sleep on pieces of cloth spread on the ground.

In November 2017, Sidonie Maboue nearly lost her life when she went with other villagers to search for gold at a Chinese-owned site near Kaye. “As I ran to carry the earth, I heard the cries of the survivors returning from the site and the young people removed the corpses with shovels,” she says in a low voice. She says she takes these risks to feed her offspring. “If I do not do that, how are we going to live. Since the death of my husband, I am the father and mother of the house.”

That night, nine people who extracted the gravel in this quarry operated by a Chinese company called “Lu and Lang” were submerged by a heap 0f sand about ten meters high. “The Chinese have arrived with law enforcement to drive the villagers out of the mine sites to better exploit our resources,” Yaya Moussa, the village chief of Ngoe Ngoe, says, widening her small black eyes. “So the villagers were forced to come in the night, in the absence of the Chinese, to extract gold and find food for their families. It was during one of these nocturnal outings that the earth fell on them.”

As in Ngoe Ngoe, artisanal mining of gold through the use of manual methods and processes draws crowds in several localities in the Eastern Region. But, the vagueness in the allocation of mining authorizations often creates conflicts between local gold miners and expatriates. According to the Mining Code of 2001, only craftsmen of Cameroonian nationality are entitled to an artisanal exploitation permit. In recent months, this exclusivity is threatened by the presence in the artisanal sites of Chinese operators who practice semi-mechanized artisanal mining through the use of mechanical shovels and loaders, gravel washing machines and chemicals.

In December 2016 President Paul Biya promulgated a new mining code that recognizes semi-mechanized artisanal mining. However, this exploitation should be carried under Cameroonian law which states that the shareholding in the companies, should have nationals controlling  at least 51 per cent. This mining code could have helped to reduce the impact of the confusion around mining permits and the rehabilitation of mine holes. But, the decree implementing the new mining law is not yet signed by the Prime Minister.

When contacted, the regional delegate in charge of mines did not wish to comment. “The minister has launched a mapping campaign with drones to identify mining sites and operators pending the decree implementing the mining code,” said anonymously a director at the Ministry of Mines who said he was not allowed to speak to the press. “All the time we hear of reports of deaths in mining sites and, we do not know who is who.”

In a video published by Foder on the dangers of illegal mining, a farmer tells how Chinese gold miners grabbed her land and destroyed her plantation with excavators. “The Chinese entered my field and started mining gold without my permission,” says Philiphine Boh. “The Chinese told me that it is the authorities that sent them and they will give me 70,000 XAF ($ 131.2) for compensation. I said that this money is insignificant for a field of one hectare that they spoiled. Currently, I have nothing left,” said this mother of five.

The losses are not just human lives. In Ngoe Ngoe, a village of 2,600 inhabitants, Chief Moussa says that during the exploitation of gold the Chinese have destroyed rivers and that many domestic animals have been stuck in abandoned mining holes. Mahamadou Abdoulaye, a 42-year-old registered miner, noted that, “when the Chinese saw a local mining artisan, a Nagbata, discovering gold, they chased everyone out of the site including the artisans who have their card while we also paid, it’s not good,” he complains. “The government must intervene because these Chinese are threatening us.”

The local populations are often surprised by the Chinese presence in the mining sites. They wonder how these expatriate operators were allowed to exploit the gold on their land. The Center for Education, Training and Support to Development Initiatives in Cameroon (Cefaid), an NGO based in Yokadouma in the Eastern Region, reports that some local elites are signing secret deals with Chinese miners.

“An elite is collecting photocopies of ID cards from villagers under the pretext of wanting to bring in companies that will provide water, electricity and jobs to the village,” said Victor Amougou, Cefaid’s coordinator, who  knows by heart the tricks these people use. “With ten photocopies, this elite can obtain 40 artisanal logging authorizations equivalent to 40 hectares of land. Later, the elite brings in the Chinese operator with whom he has a contract. The villagers who ate and drank are not aware of the deal and only notice the presence of the Chinese who have in the meantime offered envelopes to the mining authorities and military officials to be able to calmly carry out their activities.”

In addition to corruption, some Chinese in their greed for gold do not care about taxes. After the death of nine people in Ngoe Ngoe, some local NGOs and media reported that the site in which the tragedy occurred was operated by the Chinese company called “Lu and Lang”. Yet neither the reports of the local branch of the Extractive Industries Transparency Initiative (ITEI) nor the tax services know the name of the company responsible. The local official in charge of mines in the East refused to comment on this accident, indicating that this file is being handled by his bosses. “This company is not registered in our books,” says a source at the Ministry of Mines. “No Chinese company has obtained a semi-mechanized artisanal gold mining license in Cameroon,” the source said.

In fact, this fictional company is the initiative of lady Lu, an economic operator of Chinese nationality, who did not wish to comment. After Ngoe Ngoe, she and her employees moved to Colomine, another mining town in eastern Cameroon, where they continued to mine gold at a site guarded by soldiers.

“The mining sector is a mafia,” concludes Victor Amougou. “This crime unfolding before our eyes does not benefit either Cameroon or Cameroonians, perhaps an elite who would have received 5 or 10 million XAF”.